Hecht concluded he wasn’t suited for farming, however, because couldn’t take the cold working outdoors.  “I found out pretty early that kind of life wasn’t for me,” he says now. So it was off to Morningside College in Sioux City, where he made up his mind as a freshman he wanted to go to law school after earning an undergraduate degree with majors in history and political science and a minor in business.

After law school at the University of South Dakota, Hecht went to work for the Sioux City law firm where he had worked part time during college. His practice as a trial lawyer focused on plaintiff litigation, workers’ compensation claims and writing projects for himself and other members of the firm.

He points to a number of factors that attracted him to the law, including a keen interest in public events, even as a youngster. But a run-in with the principal when he was a freshman in high school left an indelible impression: In a rush to get to school on time after doing morning chores, Hecht had neglected to wear a belt, a violation of the dress code. The principal ordered Hecht to wear a rope around his waist all day, naturally making him the object of ridicule.

“I discovered from that experience I was not very comfortable being in the kind of position where I was vulnerable and didn’t know what my rights were,” Hecht said in a recent conversation about his career. “But it eventually became clear to me that having an understanding of what my rights were would equip me to make better decisions about how I reacted in scenarios like that. It really did have a formative impact.”

Following are edited excerpts from that conversation.

Q, My understanding is that when you were in law school, South Dakota waived the bar exam requirement for USD School of Law graduates.
A. That was true in 1977 when I graduated from law school.  For my classmates who were staying in South Dakota, it was very popular. It’s called the diploma privilege. I knew I was coming to Iowa, and I was going to take the bar exam anyway, so the so-called privilege didn’t really benefit me.

Q. A diploma privilege was recently proposed for Drake and University of Iowa law graduates, which was ultimately rejected by the Iowa Supreme Court. Did you think that would have been a good or a bad thing?
A. I came down against it personally because I believed that in my own experience having an intense bar review process and the expectation of a bar exam made me more serious and diligent as a law student than I might otherwise have been.

Q. What was your motivation to apply for a seat on the Iowa Court of Appeals in 1999?
A. When I joined the law firm in 1977, they were looking for somebody who liked to write, so at the outset of my career I did a significant amount of appellate litigation brief writing for the other lawyers in the firm. But inasmuch I was also assisting the firm’s primary civil litigator in his trial work, within three to five years I was sufficiently busy that I didn’t have time to write for anybody else in the firm. Then, about 10 years in, I got to the point where I didn’t have the time to do the writing for my own cases because I was either sitting across the desk from a client or another lawyer, in depositions, or in court. And I just came to realize that I missed legal writing. If you had asked me in the first 15 years of my practice whether I planned to be a judge or wanted to be a judge, I would have said no, I really like doing what I’m doing. But eventually I came to that realization I missed doing a lot of the reading and the writing and was open to a career change.

Q.  Talk about the difference between the work of the Court of Appeals and the Supreme Court.
A. Although both are appellate courts, their work is different in some respects. The Court of Appeals performs primarily adjudicative work – that is, they decide cases.  Serving on panels of three judges, the judges on that court decide a very high volume of cases. In contrast, the justices of the Supreme Court decide far fewer cases per year, but they do their work “en banc” – in other words all seven justices vote on every case submitted for decision unless a conflict of interest requires them to recuse themselves.  The justices’ adjudicative responsibility also requires them to study and vote on approximately twenty-five applications filed each month by parties requesting further review of the decisions of the Court of Appeals.  In addition to their adjudicative duties, the justices of the Supreme Court undertake an array of administrative responsibilities as managers of the judicial branch.  The administrative responsibilities include budget development and implementation, attorney licensing and professional regulation, promulgation of court rules, and leadership of task forces to name just a few.

Q. Did you enjoy your work on the Court of Appeals?
A. I did. It seemed to me that, when I was on the Court of Appeals at least, the court was a very collegial court. There were enjoyable dinners and opportunities for socialization. The out-of-towners would come to town and have dinner together each night we were here, and that sort of thing.

Q. What is discussed when the Supreme Court re-discusses a case at conference?
A. The arguments raised in the dissent. The author of the proposed majority opinion and the author of the circulated dissent have the opportunity to discuss the merits of their relative positions. All of the justices around the table have an opportunity to weigh in. The process of conferencing, I think, is really a wonderful way to sharpen the court’s written opinions and make sure cases are fully vetted before final decisions are made.

Q. Do you think your experience as a trial lawyer shapes your approach to the law, how you look at these cases and how you write them?
A. Oh, I think it does. I think that professional life experience probably is part of my jurisprudential worldview just as feeding the pigs and the cattle and learning how to work and all that sort of thing.  And I think that’s one of the important factors of having members with different life experiences. Some people on our court came from the District Court– Chief Justice Cady, Justice Zager. Others of us had no trial court judging experience but lots of us had significant experience litigating in the district court. Having different perspectives around the conference table is really, really important.

Q, Do you feel a need to be in the formal courthouse environment?
A. I’ve wanted to maintain a presence in Sioux City. I think the bar up there appreciates having a justice in the courthouse.  My wife, Sandy, is a psychiatric social worker who works in Sioux City.  So when I’m working at home, I’m there all by myself and the solitude enhances my ability to think and write. In my years of law practice, I was with people all the time from early morning until my workday ended. I had convinced myself that I would be entirely comfortable with that; that I’m a self-reliant person and I didn’t think I needed that much interpersonal contact. But I was wrong. About six months into the Court of Appeals work, I suddenly realized, “My God, I’m not seeing people.” It was really a surprise to me how isolating the job was, and it took a while to get used to that.  But I did.

Q. Where do you get your most productive work done? You have three choices.
A. Probably at home.

Q. You face mandatory retirement in eight years. What’s your thinking? Do you want to continue doing it until then?
A. I don’t have a retirement date set I would reach 20 years of service in 2019.  I haven’t made a decision about whether I would prefer to serve to age 72 or whether I will choose to do something else.

Q. When you do reach that point, are you one of these people who want to hang it up, or do you see yourself doing law-related things in retirement?
A. If I were to speculate at this point, it’s not highly likely I would be a senior judge. It’s more likely that I would pursue other interests in the legal profession.  I’m not sure what that would look like, but it will include a significant commitment to the volunteer lawyer project.  My pursuits will of course depend on health and opportunities for time with grandchildren at the time.

Q. You mentioned that enjoy helping your wife, Sandy, with her greenhouse operation growing a variety of berries, greens, squash, pumpkins and cucumbers. What other pursuits do you do for enjoyment?
A. Music. I have an acoustic guitar that I like to play, and I enjoy singing.  We both are active in our church choir and that sort of thing.  Music is a big part of my leisure enjoyment.

Q. Do you have much time for reading for pleasure?
A. Not much. Last Christmas, my daughter gave me the four-volume set of Robert Caro’s biography of Lyndon Johnson. Since last Christmas, I have made my way through two of them and about half-way through the third.  I sneak a minute here or there when time allows.

Q. You must be a fast reader.
A. That is a skill I developed. I had a marvelous middle school teacher, Mrs. Westmoreland, who taught a summer speed-reading class, and I’m so grateful she did. She was a fabulous teacher, and that made a huge difference in my life.

Born in 1952 and raised on a farm near Lytton

Graduated with a bachelor’s degree from Morningside College

Earned a J.D. degree from the University of South Dakota

Earned a L.L.M. degree from the University of Virginia Law School

Appointed to the Iowa Court of Appeals in 1999

Appointed to the Iowa Supreme Court in 2006

He is married and has two daughters and three grandchildren.

Justice Daryl Hecht
It is right at 185 miles from Iowa Supreme Court Justice Daryl Hecht’s home on a bluff overlooking the Missouri River 30 miles south of Sioux City to the Judicial Branch Building in Des Moines.

Hecht says he does not mind the drive to Des Moines for court functions because it allows him time to think. Besides, he believes it is important to maintain a presence in northwest Iowa where he grew up, went to school, raised a family and practiced law for 22 years. So he spends most of his working hours either at his home office or in an office on the sixth floor of the Woodbury County Courthouse.

Hecht grew up on a farm near Lytton, which is six miles east of Sac City. He was the second oldest of six – five brothers and one sister. Besides counting on Hecht and his siblings to help out with chores, his parents stressed music education, which left him with a lifelong passion for vocal music. To this day Hecht and his four brothers occasionally sing in public as a group, accompanied by either their sister or a sister-in-law on the piano.

Funding for this project provided by 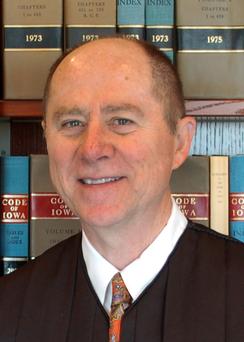